It washes over me like a silent fog, rolling into the dark alleys belonging to Jack the Ripper – sneaking up before he steals his victims.  It creeps up on me like a cold breeze teasing the shoreline where Nessie haunts the shallows of Lochness.  It churns in my stomach like a hardened UFC fighter as he mentally zones out while their hands are being wrapped – in prep for their next bloody battle – hoping to bring the glory of a title fight.

This is the the dusk of Sunday night.  The eve of Monday.

I am like a little kid who doesn’t want to go to bed – the magic will end and the I may never get to kiss the prince.

Instead, I sit on the lanai with my cats, glass of wine and write – all in hopes of prolonging the inevitable.

In hope of hopes, I took Friday off last week as a vacation day.

It didn’t work.  I actually worked from home until NOON!  So much for leaving early and getting on the road to Orlando.  (Original thought was for a leisurely drive up  Nope.)  I emailed and worked and solved problems.  The bonus of working from home is I actually get more done than I do in the office.  For me, there are less distractions.

Noon came and I was like SHIT….we have TO GO!

Throw some crap into a suitcase, jump into the car and head out of the compound.

Not even to the front gate:  SHIT!  STOP!  I forgot the address!

Turn the car around.  Go back and get the address of where we’re going.

Turn the car around.

Back to the house.

We finally hit the road and we’re on the way to Orlando.  No, we’re not going to see the Mouse or Harry Potter.  We’re going to see a comedian, Taylor Williamson.  You may remember him from being the SECOND most talented person in America.  Personally, I found him to be THE MOST Talented.  America decided to vote for a Japanese dancer instead on America’s Got Talent last year.  Personally, I find humor a lot more entertaining than dancing and this guy kills me.

I made a deal with a friend:  IF HE EVER COMES TO FLORIDA WE’RE GOING TO SEE HIM.

Most exciting thing on the drive up : Wild pigs.  On the road.  3 of them.  Just walking along on the Turnpike.  Animals, not police.  Not people from rural America.  Actual true wild pigs.  First I’ve ever encountered.

Second most exciting thing on the drive up was learning a new hand gesture.  Yep.  Leave it to me.  A beater white van, complete with front fender falling off,  passes us with all kinds of bumper stickers plastered all over the back.  Eric is driving and as it passes I said to him ::::

Immediately, from the smirk he got on his face, I knew this was a loaded question.  The image? 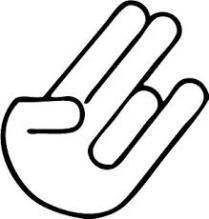 He looks at me and tells me exactly what it means.

WARNING:  If you are easily offended skip the next sentence.

WHAT?  Why would you put that on your car?

Why would you put “Grumpy Cat hates your stick figure family.” on your car?

Because I like Grumpy Cat and it makes me laugh.

Seriously?  Leave it to me to find the most ridiculous and offensive bumper sticker on this vehicle and then have to ask what it means.  Of course, being the person I am, it would have driven me nuts not to have known what it meant.  AND, I would have rather have had the photo available to show Eric rather than have had to do the hand gesture myself to ask later on what it meant.

Imagine me later saying to Eric ::: hey, what does this mean?  He would have peed himself having seen me do that.  WTF?  Where did you see that?

On a car we passed.

Although, the up side is….now I have another hand gesture for Miami traffic! Much better than this other one that I simply can’t do with a straight face!  No, I’m not sharing with you WHAT that gesture is, thank you!

I am feeling quite smug with myself now!  I know about The Shocker and I’m not afraid to use it!

Fast forward to dinner before the show.  We go to a nice Japanese restaurant.   Eric and I decide to order some sushi.  The one I want has tempura eel and some other nice things in it.  Then I look at the name:  The Electric Shocker.

Of course it is.

Topics in the Mind