He’s big.
He’s tan.
He’s 180 pounds.
He’s almost as tall as me.
His feet are as big as my hand.
He’s a Mastiff.
He’s currently at my feet snoring.
His name is Tater.
He’s staying with us until January 7th.

Life with a giant dog is interesting. Have you ever tried to make dinner with a dog head under your elbow? His head is about the same size as a basket ball. “Excuse me….”

When Eric goes out to snow blow in the morning, Tater sits by the front door and moans. If I pet the cats too much, Tater moans some more. Therefore, he has a new nickname of Moaning Myrtle, who was a character in Harry Potter.

Tater is also a heavy breather, when he’s not heavy snoring. This woke me up the first night. Hence his night time name of “Darth Tater.” I figured out why he’s tired during the day – Tater spends a lot of time running in his dreams. At night I can hear him, as he sleeps in our room. I don’t look over the bed, as Tater has hearing like a bat and no doubt, would wake up immediately and inquire about going outside.

I learned that lesson the first night. I was up and Tater came over and looked at me and I swear he said, “well, if you’re up would you mind opening the back door for me? Your slippers are right here.”

Fear not, as with all animals in our house, he now has his official UFC fight name. We have FeeBee “The Snuggler”, Liggy “The Kibble Snatcher” and now Tater “The Hedgehog”. He is slightly startled when we yell out his name, although he did enjoy UFC 124 with GSP and Koscheck. He too was ecstatic when GSP won.

Tater goes everywhere with me. In the morning we go to the gym. He sits in the Suburban (he comes with his own accessories). If I have a meeting downtown, he goes with me and waits in the car. Errands, especially those involving drive up windows, are the best -as we are guaranteed a handful of dog treats. As soon as we pull up Tater immediately puts his head out the window – to let them know “HEY SMALL HORSE HERE… SEND SNACKS….and not just one!”

So our first day of traveling around together, I came out of the post office and Tater had moved from the back of the Suburban to the front passenger seat. I got in and told him to get in the back and he reluctantly climbed back over the seat.

Next stop was the grocery. I come out and can spy Tater’s enormous head from multiple cars away. He’s back in the front seat. I hop in and there is no convincing him to get in back. So there we go in the Suburban, me and my giant dog, whose trying to figure out a comfortable sitting position up front. 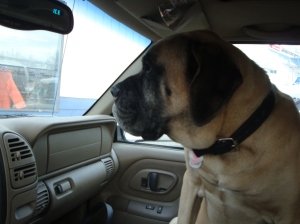 After nearly a month’s stay with us – traveling all over, Tater is going to need a vacation when his parents come home. HA!

Topics in the Mind